AW Tozer, (1897 – 1963) was a Christian pastor and author, associated with the Christian and Missionary Alliance. His birthplace was in Western Pennsylvania. His ability to express himself in a way that was both simple and forceful led to his popular title of a 20th century prophet. The combination of the power of words and the power of God was able to reach the minds of those seeking deeper spiritual relationships with God.

He credits his conversion at age fifteen to hearing a street preacher explain that salvation is achieved by calling on God. His first pastorate was achieved in 1919 without formal education. He and his wife spent 44 years in ministry with the Christian and Missionary Alliance, including 31 years at the Chicago Southside Alliance Church. During his tenure, the congregation grew from 80 members to over 800.

Tozer spent much time in prayer. It is said that his writings and his preaching simply were an extension of that prayer life. He began his stretch as editor of the Alliance Life (Alliance Weekly) in 1950. The circulation of this periodical doubled upon his assumption of the editorial post. The last part of his ministry was spent at the Avenue Road Church in Toronto Canada.

He authored more than forty books and there are also a number of compilations of his sermons that have been published. Two of his titles are considered to be Christian classics: The Pursuit of God and The Knowledge of the Holy. His books emphasize the potential and need for a deeper relationship with God. 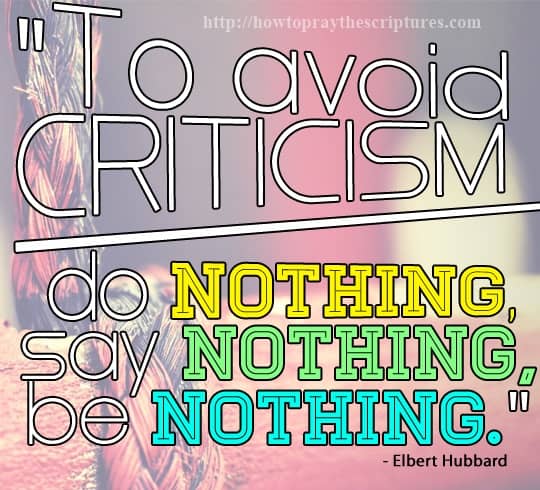 To avoid criticism, do nothing, say nothing and be nothing

To avoid criticism, do nothing, say nothing and be nothing. Elbert Hubbard