Descriptions of Christian marriage are found in the Bible, as well as in quotations from contemporary writers. The first marriage occurred with God as the officiant. The Song of Solomon is a beautiful love poem. Solomon described the ideal wife in Proverbs 31:10-31 and Paul spoke of the marriage of believers in several of his letters to the churches.

Marriages that are built in a partnership with God are more likely to be stable and long-lasting. The sacrament of marriage is one which came from the Garden of Eden. God put Adam and Eve together as a perfect match. Jesus spoke of the value of marriage during the time he spent on earth.

The value of the religious commitment contributes to a higher level of success in marriage. Marriage is important in the Christian life. Since a real commitment to Christian faith is statistically more likely to result in a more committed marriage, it is expected that the Bible will have words to say on the subject of marriage. A couple might have some disagreements from time to time. The right Scriptures can help to smooth the rough patches and re-establish the relationship with God at the center.

When a couple plans a religious wedding ceremony, they are entering into a covenant with each other and with God. The covenant is one that was established by God. Using a selection of Bible verses about marriage is a reminder of the significance of the promises that are being made to each other. 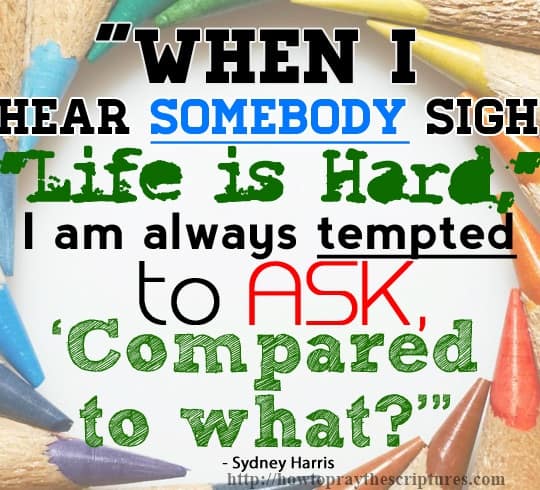 When I hear somebody sigh life is hard, I am always tempted to ask “compared to what”

When I hear somebody sigh life is hard, I am always tempted to ask “compared to what”